THANK YOU to everyone who donated and participated in our drawing! You may recall that first prize was ONE TICKET TO BURNING MAN, and second and third prizes were MOMAFire goodie bags, which include a T-Shirt, sticker, and patch! Prizes will be distributed soon!

Information regarding our just-for-fun / playa pump-up party on August 19th will be coming soon!

Want your very own fire poofer? For $250 you can have one of the 8 poofers directly off of the MOMAFire art piece after the burn! These are 1/2″ poofers with a 1/2″ redhat solenoid valve and a 5lb expansion tank. Add a hose and fuel and you are ready to poof 15 foot flames! You will be able to build the same type of poofer at Big E’s poofer class in October or November (TBD) for $350.

Want your fire poofer AT Burning Man? You can pick it up on Thursday before the piece burns!

ALSO
If you’d like to donate directly to the project to help offset our fuel cost deficit, you can send donations to Big E via paypal. Send to djbige420@yahoo.com and select “gift” as the type.

First prize is ONE TICKET to the SOLD OUT Burning Man event!

Second and third prize winners will receive a MOMAFire shwag package including a T-shirt and sticker!

To score a ticket, donate through the button below! Drawing to be held on July 30th or when we reach $1000. The lucky winner will be drawn from the big fishbowl of tickets by long-time burner and Las Vegas regional contact Anthony Bondi!!

We’ve begun our kickstarter fundraising campaign! Any contributions are greatly appreciated, as we have quite a bit of funds yet to raise to complete the construction of the poofers, transport the project to Burning Man, and fuel it up for the week. There is some fun swag to acquire as donation rewards, so check it out!

Three other winners were chosen to receive a MOMAFire t-shirt, including Jen Crum, Nick, and a ticket with only a phone number! Those winners will be contacted and delivered shirts when the shirts are available.

So thank you again to Damian of the Forgotten City and everyone who purchased tickets and otherwise supported this project so far! Locals supporting local art! We really appreciate it!

Construction is 98% done, only waiting for fire puffers to be finished before painting can begin. The project will be painted in water-based latex. Kickstarter campaign should be available by the first week in May, and raffle tickets so far total over 85 sold. More will be sold at Wednesday fire practice and at the Burning Man Community Town Hall meeting on Saturday. Schwag will soon be available in the form of 3-inch circular MOMAFire logo stickers. The first poofer-hardware tech interface test happened at Burning Mondays and was a great success! 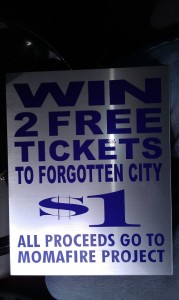 Great deal for a chance to join this sold out event!

Tickets available every Monday and Wednesday night at The Arts Factory until May 2nd, when the winner will be drawn. You do not need to be present to win.